Sunday, March 9, 2014 — Most of Brianna Albanese’s goals sound like those of other promising, bright-eyed students headed for college next year: A lover of science fiction and a writer for her high school literary magazine, she wants to study psychology and literature in college. Someday, she said, she will write her own books.

She has another dream that is simpler. “I need some normalcy in my life,” she said. “Not having to think of when to go grocery shopping, or when to clean and when to cook. That’s the most exciting part, just getting to feel like everyone else.”

Brianna’s mother died when she was 6, and her father died about a month ago, after a long illness. Living with her brothers in Astoria, Queens, she learned to take care of herself years ago. She turned to schoolwork for stability, becoming salutatorian of her class at the Academy of American Studies in Long Island City. She is looking forward to eating in a college dining hall, where, for a change, somebody else will be cooking for her.

Brianna and nine other high school seniors from New York City — students from different boroughs, and of varying ethnicities and ambitions, but with similar stories of outpacing the burdens of limited resources, and worse — are winners of this year’s New York Times College Scholarships. They will each receive a laptop and up to $7,500 a year in college aid, as well as mentoring and networking opportunities. This summer, they will spend six weeks in a variety of newsroom and business jobs at The Times.

Since 1999, The Times has offered scholarships to 242 students through the program. Alumni have become, among other things, lawyers, doctors and journalists. One, Mansour Ourasanah, 28, an industrial designer in Chicago, won a Vilcek Prize for Creative Promise this year for inventing a sleek device that breeds grasshoppers for human consumption.

Much of the aid comes from readers, as well as at least one scholarship winner.

“It’s about people who, over all, have the potential to be something more,” said Daniel Simpson, the program’s director. “And we want to be that steppingstone.”

The money goes to teenagers who have never had much of it. One of the winners this year, Ashaki Lloyd, used to be homeless; another, Bryan Caraballo, grew up dodging the drugs and violence at his Bronx school; several came to New York knowing no English; very few have unbroken families.

Yet they aim for universities like Columbia, Georgetown, Princeton and Stanford. Bryan, who was raised by a single mother who works in a cosmetics factory, has been accepted at Middlebury College in Vermont, where he plans to study biology and African-American history and literature. He wants to become a dentist.

An aspiring medical researcher or pediatrician, or both, Ashaki Lloyd lights up talking about someday curing obscure diseases. She lived in a homeless shelter for about a year when her mother could not make the rent, when she was in eighth grade. Sometimes, she recalled, she, her mother and her younger brother simply rode around on the subway. They had no other place to go.

The day-to-day business of surviving meant missing school, which put her grades and her admission to two well-regarded high schools in jeopardy. But she did not let the experience diminish or embitter her. Now living in Canarsie, Brooklyn, and attending Edward R. Murrow High School, she spends her extra time volunteering: working at a food bank with her church, or organizing dance-a-thons for the Make-A-Wish Foundation.

She cited her motto: “You can’t change life, but you can change lives.”

Eun Byoul Oh, a senior at Stuyvesant High School, was also torn from home. Bullied by peers and a teacher in South Korea for her cerebral palsy, she went to live with relatives in Bayside, Queens, when she was 9. She returned to her parents for a few years, but the prejudice she encountered pushed her back to New York in 2011.

Writing by hand is difficult. So is getting around. Unable to participate much in school activities because she depends on a special bus, she works as a translator and tutor in Queens, and spent a summer as a kind of Korean community liaison for Paul Vallone, a member of the City Council.

She said she wanted to be a lawyer so she could combat prejudice in South Korea. “My parents, they don’t think I deserve a college education because I’m disabled — I wanted to prove myself,” she said matter-of-factly. “I know many people feel limited by the society. My goal is to tell them it’s possible.”

Several others hope to become doctors. Ranjodh Singh, the son of a construction worker who immigrated from India to Flatbush, Brooklyn, had significant hearing loss as a child. He wants to become a neurosurgeon, after graduating near the top of his class at Leon M. Goldstein High School for the Sciences.

Baaba Abaka-Yankson moved from Ghana to Riverdale, in the Bronx, when she was 15, throwing herself into social life at St. Raymond Academy for Girls and embracing American culture. Bouncy and bubbly, she talks about traveling the world (especially India — she said she was “obsessed” with Bollywood) and playing the saxophone, but turns serious on the subject of public health.

“Growing up in Ghana, you see a lot of adversity and pain and suffering,” she said. “Even in a big city like New York City, there are so many hidden problems.”

The son of a Chinatown restaurant chef and a house cleaner, who immigrated from China when he was 10, Kevin He was drawn to the practical, hands-on nature of engineering, which he discovered in a high school class. His interest, he said, gradually transformed him from an unruly, misbehaving child into a teenager capable of taking care of his brother while his parents worked long hours.

Mohamed Mohamed, who was born in Yemen, also chose engineering at an early age. His after-school hours are spent helping out at the bodega his father manages in the Bronx.

His high school, DeWitt Clinton, did not offer the higher-level calculus or robotics classes he was burning to take. So he pleaded with school officials until he was allowed to enroll in classes at Lehman College, where he recently helped program robots to race each other across the floor.

When Sorangel Liriano arrived in the Bronx from the Dominican Republic, at age 7, she did not speak English. She has since spent a summer studying at Philips Exeter Academy and another traveling through Finland, Sweden and Russia; helped start a debate team at her middle school; and became the valedictorian at the Bronx High School for Law, Government and Justice. She wants to become the United States ambassador to the United Nations.

She tells the ninth-grade students she tutors to study harder. “In the end,” she said, “it’s all worth it.”

Because Jeanne Li’s aunt and uncle, whom she lives with, do not speak English, she serves as the family’s scribe and interpreter. She said she began thinking about studying statistics or math in college after volunteering to comb through data at Memorial Sloan Kettering Cancer Center. Above all, she wants to continue writing, maybe as a journalist.

Her short life has been marked by upheaval and turbulence. She does not like to talk about it, but she can write about it.

An article in some editions on March 6 about the winners of this year’s New York Times College Scholarships misidentified the City Council member for whom Eun Byoul Oh, one of the award recipients, worked. He is Paul Vallone — not Peter F. Vallone Jr. (Paul and Peter are brothers.) 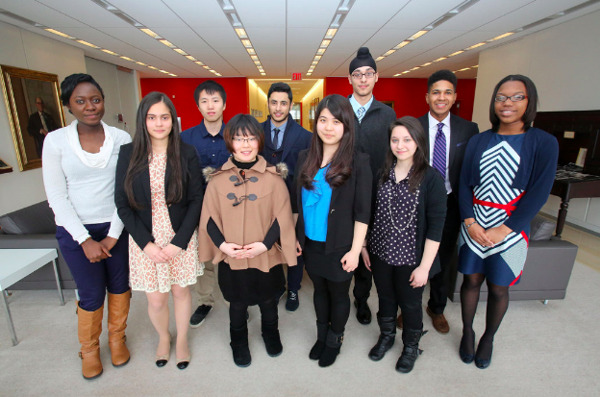