Thursday, May 25, 2017 — In a small classroom, Keoni Scott-Reid provided his opening statement. Scott-Reid had been assigned to argue against mass surveillance programs in an Urban Debate League tournament in Washington, D.C., and standing in the front of the room, wearing jeans and a sweatshirt, he spoke in rat-tat-tat bursts like a teenage cattle auctioneer.

Scott-Reid argued that mass surveillance programs operated on a slippery moral slope. He quoted Benjamin Franklin: "It is much easier to suppress a first desire than to satisfy those that follow." And then laid out several lines of argument, pointing out how surveillance can promote lawlessness. "Aggressive policing," he said, is "perpetuating the criminality that it's advocating to stop."

Scott-Reid's arguments won over the judge. His logic was tighter. He had better examples, and as the judge pointed out, Scott-Reid had expertly rebutted his opponent. "I know you like to get a rise out of people," the judge told him.

While arguing is as old as humanity, formal debating has its roots in ancient Greece. The practice has experienced a renaissance in recent years, and over the past decade, the number of students enrolled in urban debate programs has more than doubled to more than 10,000 students with more than 600 participating schools. For experts, the programs give students a way to develop crucial reasoning skills – and provide an effective way to help students learn about social issues.

High school debate programs generally follow a similar model. Students meet up once a week or so to practice their skills at developing an argument, learning how to weigh evidence and rebut counter-arguments. Every month or so, students will typically enter into a tournament, and in each round, two partners from a school will face off against two partners from another school.

The debate clubs encourage the students to discuss – and learn about – a wide range of issues from climate change to criminal justice. Indeed, Scott-Reid stayed up until 2 a.m. preparing for his debate, brushing up on recent surveillance controversies like the leaks from Edward Snowden.

Debate programs provide various academic benefits, according to researchers. Learning how to develop an argument is a real-world skill, for one. It helps students gain critical thinking skills, and experts say that understanding how to marshal evidence can help students succeed in their future careers, whether they become a sales person making a case for a new product or a lawyer defending a client in a court room.

What's more, a growing body of evidence suggests that argumentation itself is a powerful way to gain knowledge. When students learn by arguing, they gain a richer understanding of a topic, and students in the urban debate programs typically debate important social and political topics, learning the nuances of gun control or school reform.

Studies show that debate programs can boost grades and test-scores. Students who participated in one Chicago urban debate program were almost 20 percent more likely to graduate than students who did not, according to a rigorous study released in 2011. The urban debate students also had higher ACT scores and better GPAs.

Passion for debate helped spark a sea change for Scott-Reid. Before he joined the debate program at Largo High School in Maryland, he landed mainly Ds and Fs and often simply didn't show up to class. But within a year of joining the program, he began posting As and Bs. He goes to class more regularly because he'd be kicked off the team, and he rarely cuts school anymore. Plus, Scott-Reid's classes seem much more relevant now, he says, and he now hopes to go to college and become a lawyer.

What's more, the urban debate program helped hone Scott-Reid's analytical skills, and during the debate tournament, he sparred with an opponent over whether or not the judicial system currently holds law enforcement in check. At one point, Scott-Reid sharply questioned his adversary: "Prove it," he said in a loud voice. "Show me your evidence."

Scott-Reid's new skills have a downside, at least according to his parents – he's used his newfound reasoning strategies to argue with his mother and father over typical teenager things like how much time that he can spend on his cell phone. His parents don't seem to mind, though. They come to just about every one of his debate tournaments.

"The running joke in our home is that he doesn't play football. So this our football," Scott-Reid's mother said, laughing. "We are cheering in the stands." 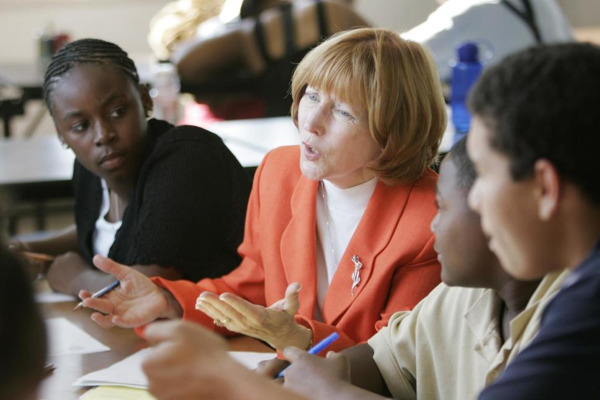