It had to be the matching corduroy blazers.

At least that’s what Jacob Klawans and Jonathan Sudo are crediting for winning the Open Championship with the New York City Urban Debate League.

“There’s a thing in debate about people having matching blazers or like matching uniforms,” said Klawans, co-captain of the High School of American Studies debate team with Sudo. “But no one really thinks to wear matching corduroy blazers.”

The two argued whether the United States should continue pressuring Israel to adopt a two-state solution with Palestinian territories.

“We’re really good as a duo in terms of knowing each other’s weakness and in terms of working in the construction of speeches,” Sudo said.

“I get really enthusiastic, and he’s obviously a downer of a person be to around,” Klawans said jokingly.

“You’re not a downer,” Klawans finished. “You are only not just not very as enthusiastic. We kind of balance each other’s personalities out.”

Klawans and Sudo represented American Studies at the debate. While corduroy might be good luck for the co-captains, the team has an unofficial mascot who serves as an inside joke of sorts: Samuel Slater.

Slater, by the way, is a controversial British-born businessman from the 18th and 19th centuries known as the “Father of the American Industrial Revolution.”
In fact, the debate team even plans to order track-style jackets with Slater’s face on the back.

“We had this argument on corporate espionage, and mainly it was this weird adapted argument based on this Chinese government policy,” Klawans said. “It didn’t really have any impact. So, when we were kept doing the in-school debate, we knew the card was kind of weird, and we kept bringing up Sam Slater as this example of this someone who stole British technology and brought it to America. It ended up being a screaming match as to who knows more about Sam Slater.”

Making a difference
Outside of Slater and corduroy, debating has really helped many of its team members. Freshman Isabel Podolsky, for example, credits the team for improving her grades.

“It has really developed my public speaking skills,” she said. “I’ve become a much better arguer both at home and at school. My writing has improved.”
Zoe Markman, also a freshman, joined the team because she wanted to learn more about public speaking. Writing out her arguments improved her writing skills and helped her to think more about international issues.

The best part about being on team for junior Kate Ferrera is making friends with her peers who she might not have met otherwise.

“I also like meeting the kids from other schools at the debates,” she said. “You can have some nice conversations. It’s fun.”

Writing her arguments for tournaments, she said, also has made her a better and faster writer.

McKenna Dibble, a junior, recalled how she saw the same group of students from different schools attending different debates. There are sometimes lighthearted moments between competitors, however. On one occasion, she and Ferrera ended up playing the song “Heart and Soul” on the piano with a student from another school.

Debate, an important art
Before Klawans arrived on the team, coach and history teacher David Iurato said his group was in “debate limbo.”

“We had been part of this now-defunct league and he came to us,” Iurato said. “They do this thing called public forum debate, and it was something that was always confusing to us. (Klawans) was kind of the guy that helped explain it and get this program on its feet. He’s one of the captains but he helped kind of change the direction of the team.”

The team works independently, researching and writing their arguments entirely on their own, he added.

Debate is a “really important art” that doesn’t get a lot of play in many classrooms anymore, said American Studies principal Alessandro Weiss.

“I think so many schools spend so much time on test preparations and standardized testing that the art of public speaking doesn’t get stressed enough,” he said. “We’re living through a time period in which facts and the importance of facts, why facts are important, is becoming clearer and clearer.

So, being able to construct an argument based on actual facts and using those facts before you arrive at your opinion in order to construct that argument, that’s a really, really important tool for use during our current generation.”

Markman and Podolsky competed in the Urban Debate League’s state championship this past weekend at Maspeth High School in Queens and won the championship in its novice league.

Klawans and Sudo made it to the quarterfinals of the same event wearing, of course, their brown corduroy blazers. 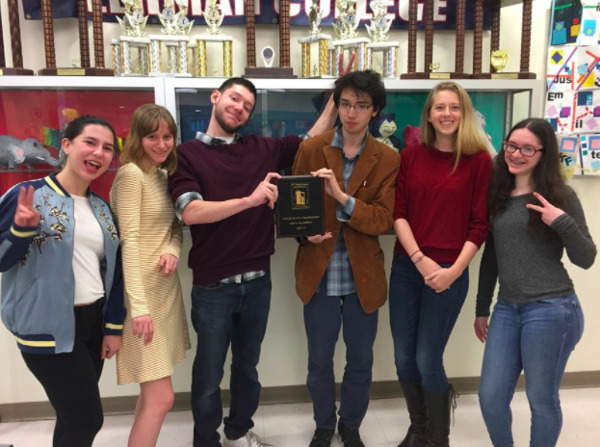