Wednesday, March 18, 2015 — ASBURY PARK – Salvatore Swain steps to the lectern and gets right to the point.

"Our obsession with plastics produces millions of tons of trash that get dumped into the ocean," he says. "We are poisoning our oceans with a galaxy of trash. The situation is more desperate than you think."

The Asbury Park High School senior then outlines a plan for the government to clean up the mess. It sounds good, but classmate Lisa Miranda has a few questions.

What technology will you use?

How much will it cost?

Where are you getting the money?

"You see them gain confidence in just speaking," said Rashid, an accomplished collegiate debater. "In the beginning some of these kids were whispering."

Each Monday, Asbury Park's debaters get coached by their kindred spirits at Monmouth University. This partnership has been in place five years, and it's bearing fruit. On Feb. 21 the high-schoolers placed second at a New York City Urban Debate League tournament in the Bronx, their highest-ever finish.

They got a nice trophy, and more importantly, affirmation.

"We went in there thinking we wouldn't win anything," Asbury Park senior Julio Gonzalez said. "Coming out with second place means all that learning, all that teaching and all that talking helped us do great things."

Ocean cleanup was the topic. The real subject here, though, is the power of mentoring.

The connection started through Project BAM, which connects the high school and college in a variety of areas, including sports, radio and martial arts. Big Brothers Big Sisters of Monmouth County is the driving force behind it. In 2009 Project BAM coordinators asked Monmouth debate team coach and political science professor Joseph Patten to make a presentation about the art of formal debate.

"We did it, and we got the Asbury kids to do a debate extemporaneously," Patten recalled. "At the end, one of the kids said, 'We should have a debate team.' "

"Our students love doing this," Patten said. "One thing I didn't expect, one interesting byproduct, is it makes them better debaters. When they're coaching, they're seeing debate in a different way. When you have to teach something, you learn it on a different level. It's no coincidence that after we started doing this, we won our first debate tournament."

"The most fundamental thing the kids get from the program is finding mentors in college to help guide them through the transition from high school," she said.

Each debate season has a theme. This year's is ocean clean-up. It's a complex topic, one that ties together economics, politics, science and social impact.

The students load up on scholarly research, then sift through it for evidence to argue both the affirmative (we need to clean this up, and here's how) and negative (we can't do that; find another way).

"They're really bright kids and it's great to see them have so much fun with something that's academics," Rashid said. "They're able to think critically, and hopefully they're gaining confidence because of it."

The synergy is palpable during the weekly workshop. There's lots of give-and-take and lighthearted banter, but when the Monmouth debaters speak, everybody listens.

"We've talked about your ethos," Patten said, offering style tips. "You don't want to be rude. If you're respectful and you come across as a gentleman or a lady, not only is that the right way to be, but it gives your words more power."

There are two debates left in the season, one in April and one in May. In their most recent rehearsal, the students brushed up on the negative. They have to take both sides at various points of each debate.

"To say 'let's not clean the ocean' or 'let's figure out something else,' that's hard to debate," Asbury Park senior Rizwana Khan said.

Miranda does her best. Her grilling of Swain was something out of a congressional hearing. The difference: Everyone was all smiles when it ended.

So who won that skirmish? It probably was even, but Miranda's task is to sell it, so she answers this reporter's final question without a trace of hesitation. 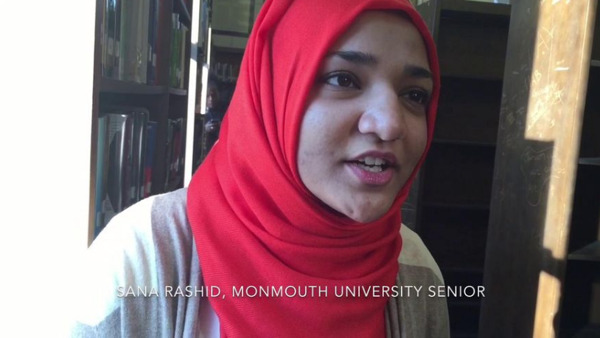