In the cafeteria of the Institute of Collaborative Education, 10-year-old Josiah Edwards cracked a shy smile. “Most of my life,” he said, “I don’t know why—I’ve always liked to argue about things. Ever since I was little, I’ve always debated. No opinion was right until I proved it right.”

As one of more than 200 competitors at the New York City Urban Debate League’s City Championships, Josiah—a fifth grader at Success Academy Bed-Stuy Middle School—was in the right place.

Twenty-six middle school students from the Success Academy Charter network competed in the tournament, held March 18 and 19. The event draws teams from city’s most exclusive private and public schools, including The Anderson School, The Salk School of Science, and Hunter College Middle School.

At SA Bed Stuy Middle School, 70 Tompkins Place, Josiah and his four classmates measured the results of the tournament not in wins, but in lessons learned during hours of practicing public speaking and researching controversial topics.

SA Bed Stuy Middle School became the seventh school in the charter network to host a debate team this year, after math teacher Patrick Salazar started the elective class in the fall. “I thought debate would help students learn to think critically and improve their public speaking skills. As middle school students, they’re learning to argue about topics that are in the news all the time,” said Salazar.

Since November, the team has attended tournaments where they debate subjects that even adults find difficult to discuss—and they do it while listening to loud heckles from opponents, and choosing to accept or reject questions from their challengers. The fifth graders spend hours each week reading research and news articles and preparing to debate up to 10 topics, because they don’t know which side they’ll have to support until 20 minutes before the debate.

“My favorite topic is whether or not to disarm the police, because police brutality is something you hear about on television a lot,” said fifth grader Skye Flores. “Personally, I believe that we shouldn’t disarm the police because they still need to protect themselves, but I’ve had to argue that they should be disarmed, too.”

One of Skye’s teammates, Madison Connor, also enjoyed preparing for the topic. “When we first talked about disarming the police, Mr. Salazar assigned us different roles. Some of us had to be mayors, or doctors, or lawyers and present our perspective on that issue. It helped us get more creative in our arguments,” said Madison.

Parents have noticed positive changes in their children since the debate program launched this fall. “She’s become more confident since she started debating. The other day, she started arguing with me about trade in China! We sometimes disagree, but she also made some really smart points. The conversations we have now are mind–blowing,” said Claudine Henderson, mother of fifth grade debater Natalia Riley.

Josiah’s team went 2-2 in the competition. While he didn’t make it to the finals, he was pleased by the feedback he got from one judge, who complimented his ability to refute his opponents’ argument and recap his team’s strongest points. 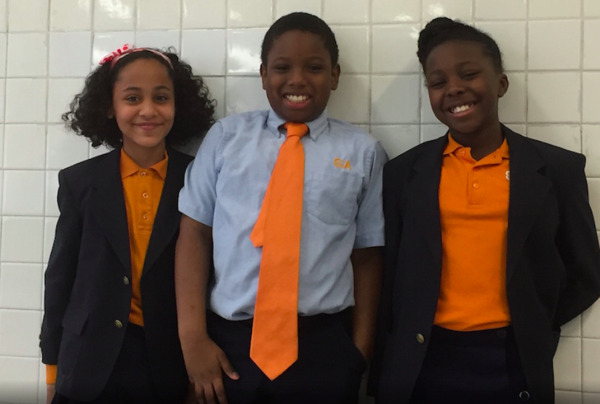