Wednesday, September 25, 2013 — Last night, mayoral candidate Bill de Blasio and his son, Dante, met up with President Barack Obama, who proceeded to offer some prize advice to the 16-year-old.

“It was inspiring for Dante–to say the least–to meet the president and to hear his encouragement. They talked about Dante’s role on his debate team,” gushed a proud Mr. de Blasio this afternoon.

“The president was very encouraging of him,” he added. “And if you see the Brooklyn Tech debate team doin’ a little better, I think the presidential encouragement may be part of it.”

The meet-and-greet at a Democratic National Committee fund-raiser came a day after the president formally endorsed Mr. de Blasio, and it was clear the candidate was deeply moved by the president’s words. In addition to praising Mr. de Blasio, Mr. Obama noted that he once also had an afro like the younger de Blasio’s, although it “was never that good” and “a little imbalanced.”

“It was incredibly touching, the presidents comments, when he acknowledged Dante and he talked about his own efforts with his own hair in his youth. That was very touching, very warm, very funny. So it was an incredibly gratifying day,” he declared. “I just think it was really a high point for me to be in his presence and the kindness and the encouragement he offered.”

Today’s reflection came as Mr. de Blasio received the endorsement of the Uniformed Firefighters Association outside the famous Hook and Ladder Company 8 on Moore Street, better known as the headquarters of the Ghostbusters.

To that note, Mr. de Blasio vowed a full review of the city’s problem-plagued 911 system and said that his budgets would spare the threats of fire company closures that have become routine in recent years. 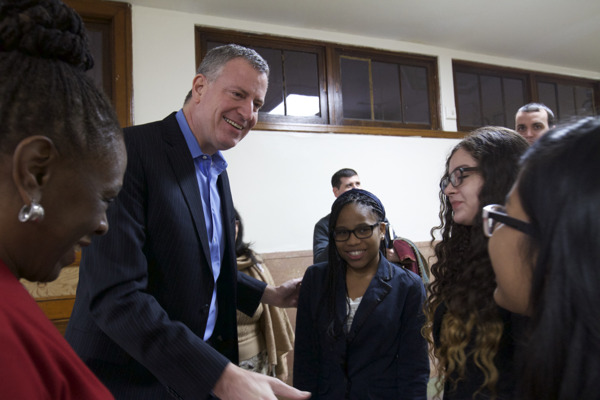