Thursday, April 30, 2015 — He’s 10 years old and already trying to make a difference in the environment.

Eliot Seol’s mission began a couple of years ago and came to fruition last Wednesday, Earth Day, when his idea for a bill to recycle batteries was introduced by state Sen. Tony Avella (D-Bayside)

Seol, a fifth-grader at PS 205 in Douglaston, spent the day in Albany with his parents, meeting with Avella, touring the Capitol and participating in a press conference after the bill was introduced.

“The day was tremendously important and fun,” he said. “I got to visit the Senate chambers.”

The 10-year-old’s bill calls for mandatory recycling of all single-use batteries. The legislation would require that all batteries be properly recycled in order to cut down on the environmental impact of certain chemicals and toxic metals they may contain from being dumped into landfills as garbage.

New York State law now requires that only rechargeable batteries be recycled, leaving millions of other household batteries each year to be disposed of in landfills and other garbage areas.

Avella believes that practice creates unnecessary waste from items that could be recycled and reused.

Eliot said he learned about the environment from his parents, who stressed the importance of organic food and of healthy eating. “We have an organic vegetable garden and I became environmentally conscious,” he said. “I used to drop off old batteries in Staples, but the Little Neck store closed.”

He said that only businesses like Toys “R” Us, Staples and some appliance stores recycle batteries. “I read a lot to learn how the chemicals in batteries affect the Earth,” Eliot said. “People get confused about what to do with them and they end up throwing them away.”

He has met with Avella over the last two years and found him “very flexible,” saying, “He took my bill seriously.”

For his part, Avella said he was “blown away by Eliot’s dedication to this cause at such a young age. Today, I can think of no better way to celebrate Earth Day than to share Eliot’s vision with others.”

The senator added that toxic batteries being thrown away as garbage is one way the environment continues to be harmed every day.

“If we can reduce the impact these items have on the environment, we can contribute to an ever-increasing, worldwide effort to protect the Earth before it is too late,” Avella said.

Many household batteries that are used in everyday electronics can contain metals such as zinc, lead, cadmium, nickel and manganese, which can emit high amounts of contamination into the environment when batteries are thrown away as garbage instead of properly disposed of through a safe recycling program.

If passed, Eliot’s legislation would mandate that New York implement a “single-use” battery recycling program, similar to ones already in place in Vermont and Connecticut, to ensure that all batteries, including alkaloid, are recycled in a manner that is safe for the environment.

There is no co-sponsor for the bill in the Assembly yet.

Eliot said he loves to debate and do research on his topics and is a member of the New York City Debate League. At school, he is on the basketball team.

He is already thinking about the future and would like to become an environmental scientist or a part-time engineer or maybe even a lawyer.

For more information on Eliot’s concern about the environment and how he got involved, go to i-pure.tumblr.com. 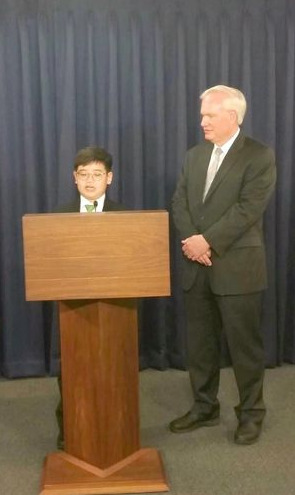