Wednesday, October 21, 2015 — The Bronx High School of Science is known for a lot of things — the most Nobel Prize-winning alumni of any high school in the country; the school’s not one, but two competitive robotics teams; the ability to get Bill Nye the Science Guy to speak at their graduation. But the school is also known for something that has nothing to do with science: their speech and debate team.

It certainly is big. Around 2,500 students from hundreds of schools around the country descended onto the 75 W. 250th St. campus for the tournament. Including judges and other support, there were about 3,000 people present, according to debate organizers. Bronx Science students, who regularly travel throughout the country for debates, hosted, but did not participate themselves.

“It’s a lot of people’s favorite tournament,” said Maddy Abrahams, a senior and the co-captain for the speech side of the team. For the tournament, she was in charge of the tournament’s satellite site at the former Walton High School campus.

“There’s something about being in New York City,” said Garnet Garcia, who is also a senior and a mentorship director for speech.
“For the tournament, I’m running concessions and just jumping around, making announcements and all that good jazz. I have a megaphone,” she laughed.

The team had all hands on deck for the tournament — even graduates make the trip back to their alma mater to help out for the weekend. One such alum was Andrew Markoff, who graduated from Georgetown University in 2014 and has started his own debate consulting company.

“It’s the largest family that I have, that I think any of us have ever been a part of. We’ve been a team for decades, historically a really, really good team, and a large team, and also an innovative team,” said Mr. Markoff.

That’s when Assistant Principal Phoebe Cooper couldn’t hold herself back.

“He’s being modest, he was the number-one debater in country when he was here,” she interjected. “He’d never say that about himself, but we’re happy to say it for him.”

Mr. Markoff gave an embarrassed laugh. “It has definitely meant more to me than anything else I’ve done in my life,” he said.

Besides the cool name, Big Bronx stands out from all the other high school speech and debate tournaments in a few ways. It is one of the only major tournaments actually held at a high school — most of the big ones are at universities.

Another tradition calls on the diversity of Bronx Science. Instead of leaving attendees to fend for themselves for dinner, the team’s parents volunteer to bring a dish based on the day’s theme.

“Each night is a different meal, a different culture that’s going to be represented. It’s representative of the diversity of the school,” explained Eli Guenzburger, the vice president of debate. The meals are free for attendees.

Last Friday night was Mediterranean-themed, with lots of pasta and lasagna. Down in the cafeteria, students in suits and other corporate-appropriate outfits loaded up their plates with a home-cooked meal.

This is the first time the team has hosted Big Bronx without former teacher and coach Jon Cruz in about nine years. Earlier this year, Mr. Cruz was arrested on charges of producing, receiving and possessing child pornography. In June, a federal grand jury indicted him on 11 counts.

“Our team is stronger than ever,” Ms. Donahue said when asked about the scandal’s impact on students. “You can see we are bigger and better than ever.”

In most years, the speech and debate team has about 300 students. This year, Ms. Donahue said, it’s closer to 400.

“We have a big novice class,” explained Speech and Debate Team President Reid Arnold. “It’s looking good. I know that already from the start, a lot of our teams have gotten bids to TOC,” he said, referring to the Tournament of Champions, considered to be the most prestigious high school tournament.

“We’ve come out really strong, so I think only good things are going to come in the future,” he finished.” 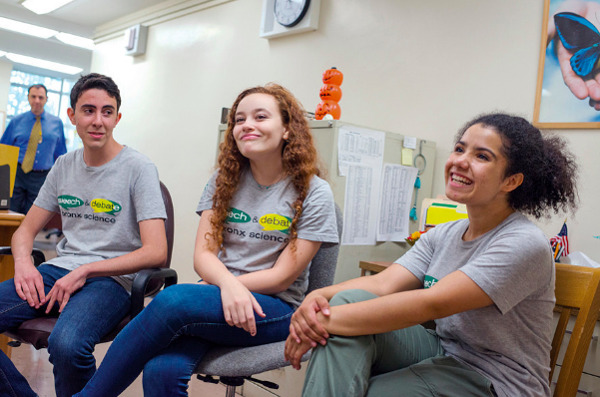