Thursday, March 19, 2015 — In a classroom in Lower Manhattan, two pairs of debaters fired off a rapid rat-tat-tat-tat-tat of ideas, battling it out before a panel of judges for the mantle of state champion in varsity policy debate.

Marshaling their argument for environmental preservation, and swatting away counterpunches about colonialism, a pair of young men from Brooklyn Technical High School rode to victory on Sunday. One of them, a tall fellow from Park Slope now residing on the Upper East Side, might strike New Yorkers as familiar.

The state champions were Samuel Eluto and Dante de Blasio, the mayor’s son.

“I felt really satisfied,” Dante said in an interview this week. “I felt like all the work I had done up until this point had really been worth something.”

He and his parents celebrated with dinner at Bogota, a Colombian restaurant in Park Slope. His debate partner, Samuel, a junior atBrooklyn Tech, celebrated by finishing his precalculus homework.

Dante played a prominent role in the campaign when his father, Bill de Blasio, ran for mayor. But for the past year and a half, he has stayed largely out of public view, focusing on school — he is a senior — applying to college and concentrating on debate.

Dante said he joined the debate team in his sophomore year because he “liked arguing.” But, he added, he came to appreciate it as a way to learn, exchange ideas and polish his rhetorical skills. This year, he has competed in tournaments about twice a month and filed away hundreds of pages of notes and research on his silver laptop.

In policy debates, Dante’s chosen specialty, arguments are delivered at an extraordinarily rapid clip, punctuated by deep gasps for breath, which can make the students sound more like powerful lawn mowers than chatty humans. To the untrained ear, it can be difficult to follow.

Dante’s parents, the mayor and his wife, Chirlane McCray, came out on Saturday to watch some of the preliminary rounds of the tournament, held at Stuyvesant High School by the New York State Debate Coaches Association. They perched at the back of classrooms to watch their son hold forth speedily on ocean exploitation and metaphysics, though they could not always keep up with the pace of what was being argued, Dante said.

At the tournament, the proposal up for debate was that the United States government should increase its exploration and development of the oceans. After losing a coin toss on Sunday to decide who would go first (they lost every coin toss that day), Dante and Samuel argued that people should stop viewing the ocean as only a resource to be exploited. To make their case, they leaned heavily on ontology, a branch of metaphysics, as high schoolers will do. Though their argument was far too deep to be encapsulated in a newspaper article, suffice it to say that the judges, unlike some parents, followed it just fine.

Samuel and Dante were declared the winners in the final on Sunday by a 3-to-0 vote, over a pair from the Bronx High School of Science.

Dante’s shiny trophy, weighing about eight pounds and standing perhaps two feet tall, will reside at Brooklyn Tech for the time being. But at the end of the year, Dante said, he can take it home. It might later decorate a college dorm room, or perhaps a mantel at Gracie Mansion. 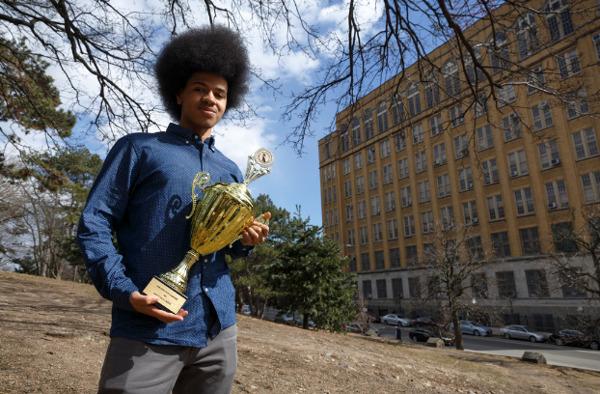