Eriselis Pizarro was part of last year’s team. Now in eighth grade, she reflected on what the activity has meant for her.

IN-Tech’s debate team grew out of the Middle School Quality Initiative, a Department of Education (DOE) program designed to get students reading at grade level before they enter high school. Implemented in more than 100 schools, it incorporates tutoring, professional development and weekly themed literacy lessons in each class.

As part of the initiative, students debate issues each week in their social science classes. James O’Toole, the assistant principal for IN-Tech’s middle school, explained that the debate team is a voluntary after-school program that builds on students’ literacy skills.

Most importantly, participating in debate has been proven to boost students’ chances of success, according to a 10-year study in Chicago public schools. Scott Moore, who coordinates the MSQI debate program, said preliminary data from a controlled study show after-school debate students made more progress in their reading level than students who did not participate. Mr. Moore said the most pronounced results are among struggling students. His team is currently working on a paper to publish their findings.

Eighth-grade student Michelle Cobos said since joining the debate team, she is no longer afraid to speak up in class.

“I was really, really shy back then. I didn’t like to speak in an audience. I only spoke with my friends,” she recalled. “But once I entered the debate team… it helped me feel confident speaking in front of everybody. Now every time I go to a classroom and they call on my name, I just get up and simply say what I need to say.”

Michelle added she has employed her debate skills to advantage outside of school.

“With my parents, because when I want to get a new sneaker, they’re like, it’s too expensive and I’ll argue with them, I’ll be like, no it’s not. Yes, it might be more expensive, but probably it will last longer,” she said.

One glance at her spiffy new sneakers confirmed who won that debate.

Seventh-grade student and returning debater Benjamin Minaya joined the team to find a social group in his first year at IN-Tech.

“I love to talk and I love to make sure that everybody knows I’m right, so that kind of fits in with the debate team. Now, I was not really shy; I just didn’t know how to put my words into a speech. I was very, like, all over the place. And then once debate team started, it helped me with my oral skills. And as you can see, I’m talking like a pro,” he said.

“Although I’m not a part of your practices on a regular basis, it’s nice to see your growth as young orators, your ability to speak,” Mr. O’Toole said to the three students. “Benji, you were never shy, but your speaking skills have greatly improved through this process. And that not only translates to debate, but it translates, as you said, Michelle, to your classrooms.

“Not being afraid to take a risk academically and to speak your mind is a skill you will take with you for the rest of your lives, no matter where your paths take you,” he concluded.

Mr. O’Toole said as both a middle and high school, IN-Tech is in a perfect position to see the Middle School Quality Initiative pay off. He explained that this year is the first time students who have gone through all three years of MSQI are entering high school.

“Some ninth-grade teachers have already exclaimed, the ninth graders that have gone through three years of MSQI and tiered reading have demonstrated that they are so ready for high school,” Mr. O’Toole said, using the DOE acronym for the initiative.

“I’m trying to find a way to become a lawyer… You always start somewhere. And starting with the debate team is my one-way ticket to becoming a lawyer,” she said, closing out her statement with the confidence of a seasoned debater. 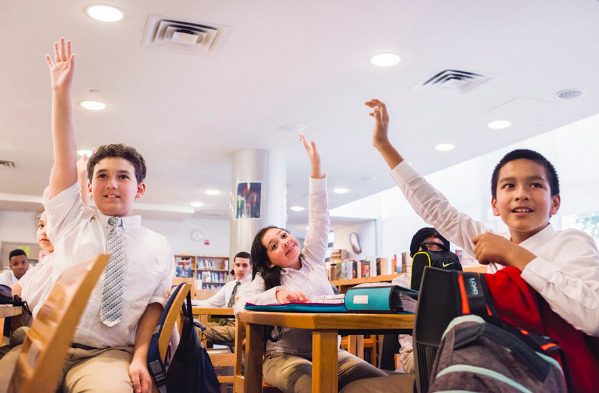