Enrollment at New York City’s most troubled schools continues to drop, even as the city spends hundreds of million of dollars a year trying to fix them.

Preliminary numbers show about 38,000 students go to 86 remaining “renewal” schools, down from 44,000 when Mayor Bill de Blasio announced plans to save them two years ago.

A city department of education spokeswoman noted that the rate of decline has slowed “dramatically” over the past year.

A head count in late September shows most renewal schools lost students. Seventeen shrunk by at least 25% over the past two years. Others have reversed declines, by taking steps like publicizing a star debate team or a culinary program.

One of the steepest drops came at the school where the mayor announced his turnaround plan with great fanfare. Coalition School for Social Change in East Harlem had 283 teenagers when the mayor called it a model for reform in November 2014. Last month it had 174.

“Just by being a renewal school, some parents won’t send their kids there,” said Bill Askins, who recently retired from the school as college adviser and social studies teacher.

The de Blasio administration plans to spend $231 million annually on renewal schools over the next three years on top of their regular funding, after pouring in $195 million last year, according to the Independent Budget Office. The city added social services, teacher training, longer hours in class, health clinics and other interventions to help students from poor families.

There is an inherent problem in the program: Labeling a school as struggling spurs many families to look elsewhere in a city that offers many public choices. By state law, students at the lowest-achieving schools must be notified they can apply for a transfer. Some balk at a staying at a school they see at risk of closure.

Those numbers don’t include eight renewal schools that Mr. de Blasio’s administration already closed or merged because they became too small or dysfunctional. Last month 23 renewal schools were smaller than 250 students.

The mayor’s predecessor, Michael Bloomberg, shut many ailing schools to start new ones with fresh staff and philosophies. But Mr. de Blasio has promised to close them only as a last resort, since doing so can break up communities and displace vulnerable children.

Ernest Logan, president of the city principals’ union, said some renewal schools had fantastic new offerings but the department isn’t doing enough to publicize them. “If you’re not promoting these schools, then no one is going to go to a school they think is a failure,” he said.

Aimee Horowitz, executive superintendent of the renewal program, said the department showed schools how to plan family nights, invite community leaders to see their improvements and develop ties with feeder schools. “We are providing schools with all the information around these strategies so they can effectively rebrand,” she said.

Benjamin Honoroff, principal of M.S. 50 in Brooklyn, said sending children on his award-winning debate team to recruit at elementary schools had helped. “I can talk about the great work we’re doing…until I’m blue in the face but when students do it, it’s much more powerful,” he said.

Vivian Selenikas, principal of Long Island City High School, said teenagers were drawn to its career-oriented tracks offering certifications in culinary arts and sports medicine. She said her staff and students visit local middle schools to be “messengers of the collaboration, the rigor and the supports.”

Other schools have faced upheaval. When the mayor drew a standing-room crowd to the Coalition School for Social Change two years ago, he said it was the perfect place to lay out his vision for reform because its energetic leader and dedicated staff “brought a new vitality.”

That principal left for a new post at the education department last spring and most of the teachers followed suit. Several parents complained in interviews about the disrespectful atmosphere and continuing vacancies. Adding to the strain, about a third of the teenagers have special needs. One parent said her son wanted to transfer out but wasn’t sure he would end up someplace better.

Ms. Horowitz, at the department, said the new principal was working to strengthen the curriculum and expand programs. Diane Muhammad, a parent, said she was hopeful the school would improve with the extra attention.

“The situation these schools are in didn’t happen overnight,” Ms. Muhammad said. “It’s going to take some time to correct the damage.” 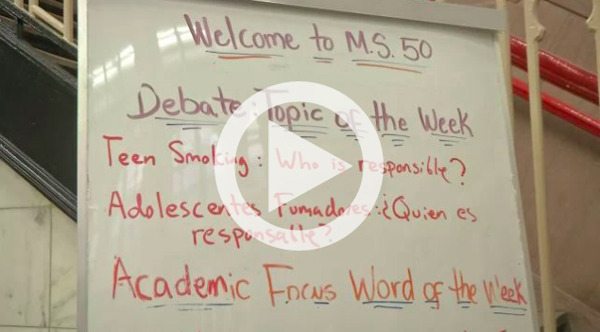