Monday, January 7, 2013 — The Transportation Research Board was thrilled to be approached by the National Association for Urban Debate League to hold a unique session where students would debate the investment in transportation infrastructure. Not only would it provide a great learning experience for the students, it would give the TRB audience an opportunity to learn from the perspectives of students.

The National Association for Urban Debate Leagues works with 19 affiliated leagues and they focus on competitive policy debate. Policy debate focuses on one single topic question which demands the students go deep on the issue for the pros and cons.

Last year, of the 19 leagues, 100 percent of the participants graduated from high school, in high schools that have a 50 percent graduation rate. Also, 98 percent went on to college or in to the military.

In addition to competing nationally, they invite debaters to participate in public debates, which are shorter versions of a competitive debate with guest judges to have their arguments evaluated by outside experts.

The topic of the policy debate was: The United States federal government should substantially increase investment for transportation infrastructure.

Judges for the event:

The debaters referenced numerous reports and studies, as well as related to personal experiences of their points. Raiesa Fraser presented the affirmative case for topic stating that there is not enough attention and support to mass transit in urban areas and that there is an unfair distribution between low-income and high-income populations. Funding currently and historically has favored suburban areas and the cutbacks in transit subsidies have further isolated the poor and inner city neighborhoods.

Fraser stated that near her school in Brooklyn, many people can't afford cars and they rely on the C Train. A commute is more than an hour to school and they often have to wait more than 15 minutes for a train, even during rush hour.

Several points she discussed were that substantial urban mass transit funding would provide for adults looking for jobs, educational opportunities for students to attend schools that may not be in their neighborhood and access for urban residents to quality grocery stores and farmers markets.

On the economic side, she talked about investing in mass transit providing higher-wage jobs, generating tax revenues and revitalizing U.S. manufacturing.

The cross examination was conducted by Darius Adejo-Liely, who asked about good examples of federal money being spent on transit, how it is determined those are good investments and how long and how substantial of an investment would it take for a place like Baltimore to have a system closer to that of New York.

The negative constructive was presented by Jabree Gordon, who began his case with a rap and its theme: substantial investments in mass transit in urban areas leads to gentrification of communities that hurts poor families struggling to make ends meet. Increased inequality from increased transit in cities is often a negative, unattended consequence, he stated, referencing an example of the West Baltimore area near where he lives.

He stated it is unrealistic to assume there will be additional funding and that if substantial money is spent on transit, we will be unable to address the highly congested roads and the aging bridges and highways. Referencing the Minneapolis I-35 bridge collapse, Gordon said there needs to be more government spending on current infrastructure.

He also stressed that states and local government would be better to serve the needs of their citizens as they better know the community needs and goals; federal government has other responsibilities and a cookie-cutter policy to meet the needs of all areas risks not meeting the needs of any.

The cross examination was conducted by Avril Gordon Joseph said the status quo is blatantly against low income, asked how spending money on highway infrastructure helps those that can't afford cars . Gordon said as cars are the primary mode of transportation, the funding would be helping more people and with states having closer ties to their citizens, they will know what's best.

Darius Adejo presented the negative rebuttal and stressed that automobiles are the primary mode and spending more on urban mass transit doesn't make sense. He also talked about goods being transported via roads and highways and if trucking can't efficiently move products, the urban areas will receive a lack of goods.

Looking in his home area of Baltimore, the average commuting time for students was 23 minutes so transit is already efficiently moving students. Given the current political climate, he said, people do not trust the federal government to spend their tax dollars responsibly, and state and local government would be better able to meet the needs of their residents.

Gordon Joseph's affirmative response talked about studies of TOD of 42 stations in 12 different metro areas and that there was no cause and effect between TOD and gentrification. She stressed that cities can take many steps to avoid gentrification by instituting policies. She also talked about some of the benefits gentrification has brought to areas, including streets fixed and stores built.

While it's easier to delay investment in the short-term, Gordon Joseph talked about the hidden costs, including future maintenance equipment breakdowns. And her final points talked to the point of the number of people in urban areas that have stopped using cars and the trend of younger people choosing to use transit, bikes and walking over automobiles.

For the affirmative rebuttal, Gordon referenced Chicago, where after increasing transit and shutting down Caprini Green, disparity still exists between the "haves" and the "have-nots." He said they say raising tides rises all boats, but that assumes you have a boat.

He also talked about no clear link between mass transit and food sources, asking whether increased transit would change people's health and food habits.

Fraser ended the affirmative restating how transit alleviates urban sprawl, provides improved food options, provides access to better education, increases tax revenues, and while it may lead to gentrification, cities can enact policies to mitigate that.

Cunnigham: The students are the best of the brightest and the research they’ve done is phenomenal. Vote: Affirmative

Kurland: The fact they were able to get up and speak with such poise and command was commendable, though would have liked to see more cross examination from both sides. Vote: Affirmative

McCall: As a high school teacher, she was proud to say she has similar students. She particularly liked the examples from their personal communities as many of the students in the audience were able to identify with what they were saying about getting to school with mass transit. Vote: Affirmative

Priddy: She commended their bravery for getting up in front of a roomful of transportation experts and was impressed with the research and personal connection. While several judges had commented on Gordon speaking too quickly, especially during his rap introduction, Priddy pointed out that he may have had stronger points but they didn’t all come across because some were missed. Vote: Affirmative

Shane: Shared in his colleagues amazement at the level of the presentations. He said he hopes that the next generation will take some of these issues more seriously than the current generation is doing. Vote: Negative

Wright: He said it’s important for him to feel that the slots of voids current transportation professionals are going to have by moving on and retirements are going to have the likes of these students to come in to those slots. Vote: Tie 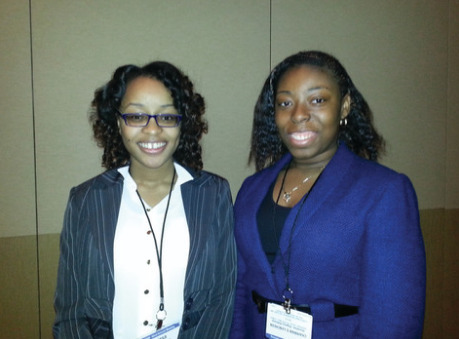