Saturday, December 1, 2012 — The New York City Urban Debate League (NYCUDL) has received a Relationship Grant from the Brown Rudnick Charitable Foundation for the last three consecutive years to help establish and advance a debate league in New York City. The NYCUDL’s mission is to close the education and civics achievement gap by providing the best opportunities, resources and training so all students can become Great Debaters. The league has achieved rapid expansion and broad success. In late 2012, they were recognized by the White House. We recently chatted with the NYCUDL Founder and Executive Director, Erik Fogel, about the success of the league and the recent recognition by the White House (story continued on page 3).

Tell us why and how you founded the debate league.

Erik: I’m a public school teacher and big believer in the power of debating for education. The kind of oppositional thinking encouraged by debate clearly contributes to critical thinking and leadership skills. In 2008, we started a debate team with just our school in the South Bronx, Bronx High School for Law, Government and Justice. This is a Title I school where the majority of students were on free lunch and either African American or Hispanic American. I knew a free debate program would be greatly beneficial to the inner-city students who did not have the opportunity or access to participate in other debate leagues. We bootstrapped the project, and I was quite literally baking and selling cupcakes to fund the program. Almost immediately, the students received great value from their participation. The program helped them to improve their literacy and reasoning skills, and helped them develop poise and confidence. I knew we needed to continue the program, but bake sales would only get us so far.

How did you begin partnering with the Brown Rudnick Charitable Foundation? I heard about the Brown Rudnick Charitable Foundation grants program while I was at another school. In 2010, when I started the debate team at Bronx High School for Law, Government and Justice, I applied for the Foundation’s annual Relationship Grant to purchase laptop computers for our debaters to put them on the same technological level as our competition from betterresourced schools, as well as to help fund our travel to competitions. The Foundation’s assistance made a huge impact on the success of the program and our ability to get it to the next level. We were able to offer free debate education opportunities to all students at our school. We transformed our small Title I school located in the nation’s poorest congressional district to national debate champions -- the first Title I school to ever do so! In our second year, the New York City debate league collapsed due to lack of funding, and debate coaches and teams from across the City sought our help in keeping debate alive in our schools. Our geographic footprint expanded to all New York City. We went from five participating schools in 2011 to 50 schools, and in 2013 we are aiming to have 75 schools signed up.

In October 2012, in addition to funding from the Foundation, the law firm of Brown Rudnick provided pro bono legal representation to help us to obtain 501(c)(3) status, which allows us to pursue different types of funding and support. Thanks to Brown Rudnick, we are rebuilding a successful and sustainable nonprofit that for the first time will provide free debate education opportunities to all New York City students. This is historic. Brown Rudnick is making history for legal education in New York City. Tell us about your recent visit to the White House. The NYCUDL received the prestigious 2012 National Arts and Humanities Youth Program Award, which honors community based arts and humanities programs that are effective in developing learning and life skills in young people. On November 19th, we visited the White House to receive the award from First Lady Michelle Obama. Students from the Bronx High School for Law, Government and Justice and I accepted on behalf of the NYCUDL. It was a remarkable moment for both our debate league and for the students. When I was baking cupcakes to run the program, I never envisioned that one day soon we’d be standing with the First Lady at the White House.

We will use the 2012-13 Relationship Grant to help expand debate opportunities for all New York City debaters by providing free local and regional tournament opportunities so the best of our debaters can break through the glass ceiling and compete against the very best debaters across the state, region and nation. This is a historical and pivotal time for an explosion of legal education in New York City, and Brown Rudnick is helping us every step of the way. The Brown Rudnick Center for the Public Interest has been our greatest champion. The Foundation has been the number one financial contributor to the NYCUDL for three years now, and Brown Rudnick Partner Katy Gardner and Associate Steven Cheng are our pro bono lawyers. We literally would not have a New York City debate league today without Brown Rudnick. Clearly, it’s not up for debate. Brown Rudnick and NYCUDL are a  winning team.

My work provides frequent opportunities to visit schools. I am reminded each time, as I observe the student-teacher interaction, that in the schools where our Center strives to help, the teacher’s work is so demanding, the students’ challenges are so great and the stakes are so high. I am aware anew of how much of the future – for the individuals in the classroom and, in some sense, for the world itself – is being shaped right then, right there in those teacher-student interactions. Usually, I leave the school with a sense of hope. Most of the teachers are giving it their all and many of the students appear to be engaged and learning. The Center’s support is a small boost towards their success. It is good to visit these classrooms. Occasionally, though, much more is happening. The teacher is charismatic and seems to have a sixth sense that allows him/her to engage simultaneously with each student while motivating them forward together as a collective classroom. Often the teaching is hands-on, involving active participation by students in something that they “get” is larger than themselves. The students in these classrooms are all engaged, eager, excited and alive. The learning happening and the transformation occurring is tangible. Visiting a classroom like this is great. I leave those schools with a bouncier step, a strong sense of optimism for the future and with a deep admiration for that transformational teacher. He or she is a hero, really. Profiled elsewhere in this newsletter is one such teacher, one who went from baking cupcakes to the White House with the inner-city students he has inspired. Erik Fogel is one of those transformative teachers who is the reason for my optimism. Thank you, Erik, forthe opportunity for our Center to be part of your success. 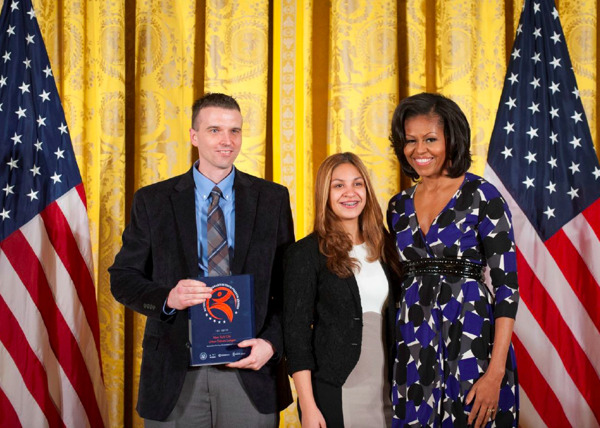