Tuesday, May 3, 2011 — After Erika Marte and her sisters left the Dominican Republic to join their father in New York, he wouldn't let them read or watch anything in Spanish.

"'This is a country where you only speak English. You need to get educated,'" Ramón Marte told the girls.

That discipline took Erika far: Tuesday she will be officially announced as a winner of the prestigious Gates Millennium Scholarship, which pays for four years of college education and expenses.

The award requires eight essays and two recommendations, and is given to 1,000 youngsters across the country.

Erika came to the United States only days before 9/11, unable to speak a word of English. She lived with her father, four sisters, grandmother and three cousins in one room off the Grand Concourse.

Her mother, Jazmin Carrasco, who made a living selling chickens in the Dominican Republic, joined them, and the family moved eight times until they settled in Van Nest. Erika's mother now sells perfume, and her father is a tax preparer.

"My father would have us take out books from the library and we had to write book reports," said Erika, one of nine children.

"He would always match me with my sister Diana and we had multiplication tables we had to recite to him - and she was four years older than me!"

Her father said there was a reason he was so tough.

"From the first day she came here, I noticed how smart she was," Marte said. "She would absorb information much more quickly than anyone else."

At the Bronx School for Law, Government and Justice, Erika was on the debate, mock trial, softball and volleyball teams. Her favorite activity is Girls Write Now, which allows her to express herself through writing.

Erik Fogel, her debate coach and teacher, knew he would nominate Erika for the scholarship when he saw how persistent and smart she is.

"She would not just answer all the questions in class, but she would challenge and debate me," he said. "At first she was really annoying, but you knew this was one incredible student."

The bubbly scholar plans to study English literature and pre-law at upstate Hamilton College. She wants to "try law school," she said, but really dreams of becoming a teacher.

"I think I got here because of a lot of teachers I had," she said. "I would love to do that for one kid, and that one does it for another." 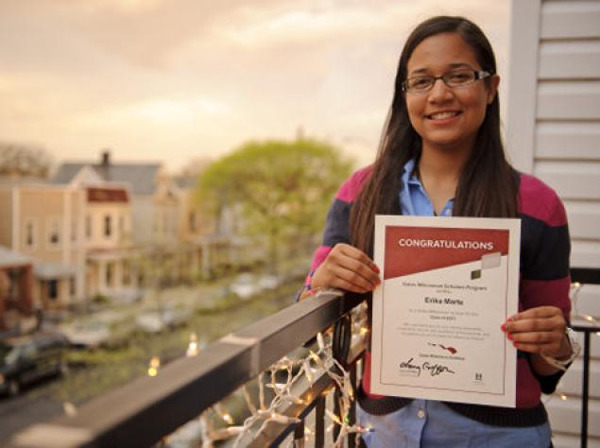