Saturday, February 4, 2017 — Over the last several months, we’ve seen public education come under attack like never before. We’ve been told that “inner city” schools have been left to rot, that they are violent, dysfunctional and that their students leave school without any knowledge.

We’ve been told that the way to improve schools is by privatizing them, and that this work should be led by non-educators — fundraisers and executives who’ve never stepped foot in a classroom.

This rhetoric isn’t about what’s best for children. It’s offensive and flat-out false, and its only purpose is to undermine public education — which is the foundation of our democracy.

Educators and leaders can’t afford to remain silent while those without skin in the game make false attacks on our schools and public education.

That’s why I pledge to always stand up for public education. I’ve spent more than 50 years in education, and I’ve seen too much of the incredible work of teachers and principals — and the incredible results for students and families — not to fight for it.

It’s time for a reality check. First and foremost, nothing succeeds like success, and that’s what we’re seeing more and more in public schools across the country. Here in New York City, by every measure, schools are the most successful they have ever been. We have a record-high graduation rate and the lowest-ever dropout rate, the highest number of students ready for and going to college, a record number of students taking and passing AP exams and test scores continuing to rise.

And the promise of public schools is that we serve all children, not just some. We are addressing a number of struggling schools — schools that have faced long-standing and systemic challenges for decades — head-on. Through the Renewal School program, we’re providing 86 schools with five hours of extra learning each week, targeted training, wraparound services to get at underlying issues and the support and guidance they need to get better.

Our investment in Renewal Schools demonstrates our belief in the power of public education and in the potential of every student to succeed — that’s the message we send when we invest in our kids and our schools, and have educators overseeing this work.

If you put time and effort into public education, you get results. It’s no surprise that Renewal Schools are seeing real progress: graduation rates and state test scores have increased, chronic absenteeism and suspensions have decreased, and more parents are involved in their children’s education than ever before.

Those who think public education is a lost cause should look no further than M.S. 50 in Williamsburg. There, Principal Ben Honoroff has leveraged his school’s Renewal resources, including additional learning time, to create a championship debate team. The debate program has not only won city-wide tournaments, but it has sharpened students’ critical thinking skills and helped them perform better on State ELA and math exams.

And those who think struggling schools can’t improve should visit Leaders of Tomorrow Middle School in the Bronx where Principal Sean Licata helped create one of the city’s only aviation-oriented STEM programs using real flight simulators. The program combines physics, math, geography and meteorology, all while giving students their first taste of what it’s like to fly an aircraft.

Students at this school aren’t just developing a new interest in their STEM classes, they’re dreaming about becoming pilots and engineers.

We’re not turning around every school overnight, and the truth is, it won’t work every time. When schools don’t make the improvements their students need, we will continue to hold them accountable — including consolidating and closing schools. But when you believe in something, you fight for it.

We believe in our kids, and we’re fighting for them. We believe in public education. That’s why we’re going to keep investing in our Renewal Schools, and working harder than ever to improve them.

There is a lot more work to do, and we are ready. 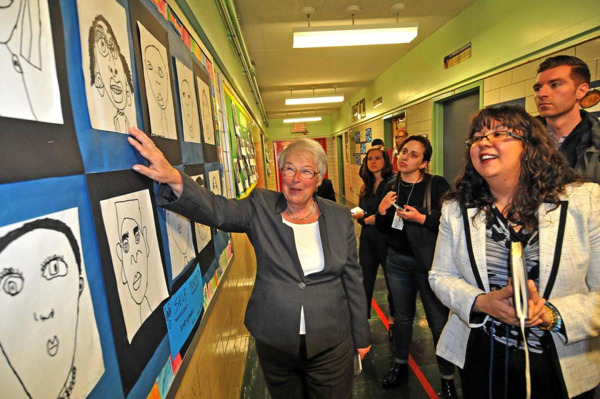