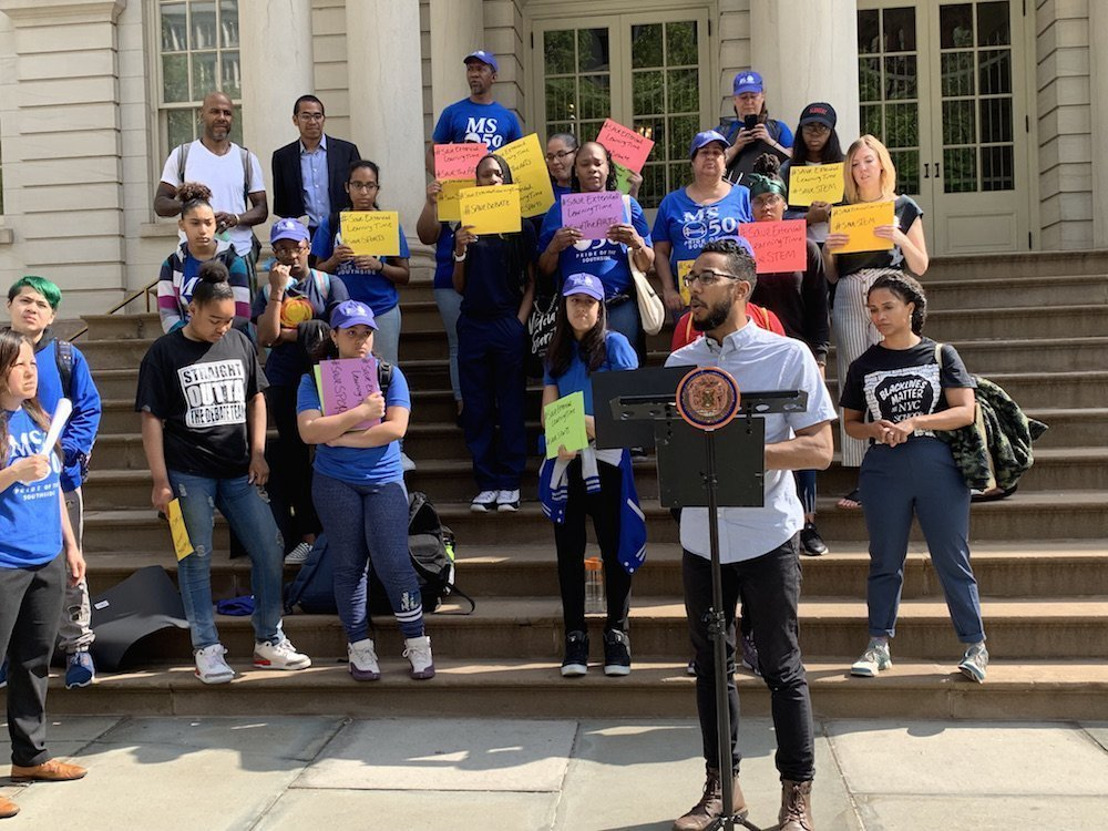 ELT is used to create robust, additional learning and enrichment opportunities for students either throughout the school day or as part of an after school program. The program has been a part of John D. Wells’ middle school for the past four years and they use the funding to extend their school day until 4 p.m.

“For a long time the school was struggling. We were losing students, the grades and the performance wasn’t there and then De Blasio decided that we were going to do something and invest in our schools. We applauded him for that and in doing so we saw a complete turnaround in junior high school 50,” said Reynoso. “Increasing the enrollment, increasing the performance, expanding services to these kids that they would have never seen in any other school without the support of the renewal school program.”

Before ELT was adopted into MS 50, the school was struggling with keeping students grades and enrollment up, but because of the renewal program the school bounced back and now even has a nationally recognized debate team. So in early May when schools were notified that ELT funding would not be renewed in the 2020 financial year budget the news came as a huge loss to students, parents, faculty members and even the chair of the education committee, said Treyger.

Treyger explained how during last year’s hearing on renewal schools the Mayor’s administration and the DOE promised no cuts will be made to renewal schools or rise schools. “Mr. Mayor, Mr. Chancellor you are breaking a promise to our children. We will not let this pass,” said Treyger.

“Mr. Mayor, I remember your rhetoric last year, you said schools, not jails. Well in this budget we’re seeing no increase in school funding, proposed cuts to schools, but billions in operationalizing jails. That is not going to fly with this New York City Council. Do not cut one dime to extended learning time,” he added.

DOE Spokesperson Doug Cohen provided KCP with a statement via email about the cut to ELT. “We’re committed to making the best decisions for kids despite a difficult budget climate, and we were able to preserve 100 percent Fair Student Funding and full Community Schools partnerships at our Renewal and Rise Schools,” said Cohen.

“Students at Renewal and Rise schools will continue to have learning opportunities outside of the regular school days, and we’re also working individually with schools that want to offer additional extended learning time,” he added.

The DOE has been planning to phase out the “Renewal Hour” over the course of two years and accelerated the phase-out due to the budget climate. According to the DOE, the “Renewal Hour” is about ten percent of the overall renewal budget.