Thursday, September 3, 2015 — Middle School 50 in South Williamsburg has a new Principal, and even though the school term hasn’t yet begun, he’s not wasting any time getting the ball rolling at the school.

Just after joining the school this summer, Ben Honoroff launched and hosted a debate institute at the school in partnership with the New York City Urban Debate League and the Middle School Quality Initiative.

Eight MS 50 students participated in the institute, investigating the risks and merits of animal cloning, and competing with students from other schools in a tournament at the conclusion of the summer program.

“The skills you build in a debate program really help foster a sense of community, said Honoroff. “We want debate to be a central part of the change we’re initiating at the school, and we want to grow our team, and have them compete at the national level.”

Last year, MS 50, which is also known as Junior High School 50, was designated part of the School Renewal Program, which includes 93 other low performing schools in the city that the Department of Education hopes to turn around with clear goals for each school and increased community involvement.

Honoroff is spearheading that change at MS 50. His number one concern so far is dropping enrollment, but he stands confident that as the new programs take off at the school, the results will restore faith.

His immediate goals include improving reading and math scores, and initiating programs like spoken word, improving sports teams, and implementing a robotics program.

The debate program will also go a long way towards securing improvements, according to Honoroff. Students tend to drop reading skills over the summer, due to a lack of exposure, but the debate program kept students engaged.

Honoroff said he’s very grateful for the warm welcome he’s received at the school, despite picking up the reigns at a difficult time.

“The entire administration at the school has shown tremendous dedication,” said Honoroff. “It’s important to empower the passions of students and teachers alike, create more academic opportunities, and bring a level of joy that makes students push themselves harder.”

Prior to taking on as principal, Honoroff worked with MS 50 and several other city schools to improve literacy levels. Prior to that he worked as an Assistant Principal at the Acorn Community High School, where he founded a national level debate team.

He wants to emulate that level of success at MS 50 and for now he’s firmly on track. 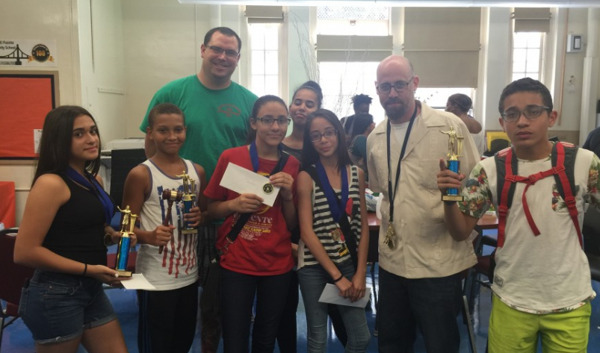