When it comes to debate, participants must research, construct their arguments on the spot, and then present those cases publicly — all while on the clock.

If that sounds hard, it’s not. At least when the more than 50 students who make up the IN-Tech Academy debate team are involved. In fact, according to Aubrey Semple, the head of the New York City Urban Debate League, the school “one of the most competitive middle school debate leagues” in the city.

Over the past three years or so under the leadership coach Wendy Spector, the IN-Tech debate team has won a number of top speaker awards, and has placed in the quarterfinals of the debate league. Yet many of the team members see debate as much more than an extracurricular activity — they see it as a way of life.

“It teaches us civil discourse and conversation,” said Nelly Tavarez. A freshman who has been on the team for three years. “We learn how to write argumentatively. And it’s important to have these skills, in my mind, because it forces you to explain your point. There is no screaming. You have to express what you think in a peaceful way.”

The team members are pushed outside their comfort zones, placed into positions that promote growth as orators as well as people.

“My first debate I was really nervous because of the public speaking,” said another freshman, Obdulio Martinez. “But later it taught me to speak in front of people and to stop using a lot of slang and words like ‘like’ and ‘um.’”

“Debate also teaches you social skills because you’re speaking against people and there’s spectators and there’s pressure,” said Benjamin Minaya. “When you get ready to go to college and have those speaking classes, you’re already going to know what to do.”

Being a young debater also helps open the mind to other points of view. It teaches critical thinking and enables students to create their own opinions based on what they evaluate through evidence, Semple said. It also teaches students to agree and disagree, critical for living in society.

The debaters spoke about what it was like to argue against topics they wanted to defend, like gun control. Jayden Sosa, a seventh-grader who has spent two years on the team, explained how the slope with bias can become slippery.

“If I say ‘limited gun control saves lives,’ I can’t just say that,” Sosa said. “I need to be able to back that up with how.”

He stressed the importance of understanding both sides, even when he might not agree.

“In debate, it doesn’t matter if you think the subject is good or bad, you can’t know just the pro or the con side,” Sosa said. “You have to know the pro and the con.”

In some cases, bias even translates into the opinion of the judges who evaluate the debate rounds. Tavarez recalled one round where her judge seemed to show partiality because she openly agreed with the other team’s stance.

However the evidence Tavarez’s team presented ultimately earned victory in that round.

IN-Tech’s debate team wasn’t always what it is now. There was a time when the team was practically non-existent — that is until Spectior and Semple came to the rescue. Not only does Spector run the debate team, she also coaches track and still finds time to serves as the dean of discipline.

“She made the debate team her own,” Semple said. “Holding a very successful debate program is a very difficult process. Wendy made a firm commitment to the students and to the team.

“Part of IN-Tech’s success is the student’s persistence to be successful, and it definitely shows.” 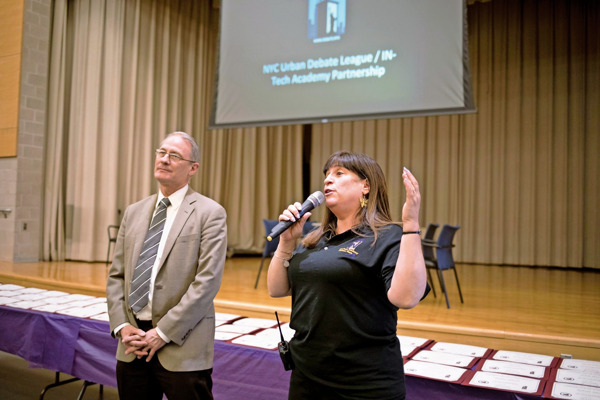