Friday, April 3, 2015 — A long and intensive process paid off for two members of the class of 2015 recently as Lisbeth “Liz” DaBramo and Erika Marte earned Thomas J. Watson Fellowships for 2015-16. These fellowships will allow the seniors to travel the world and complete their personal projects. DeBramo’s and Marte’s projects are entitled “Water Ways: An Exploration of Water Sustainability Strategies,” and “The Faces and Functions of Educational Volunteerism in the 21st Century,” respectively.

Out of the 700 candidates, 50 were selected nationwide including the Hamilton seniors. Each fellow is awarded $30,000 to travel and study outside the United States. Over the past 17 years 28 Hamilton students have received fellowships.

DaBramo’s project, which focuses on water sustainability, will take her to Bangladesh, Singapore, Jordan and Bolivia, each of which is “adapting distinct techniques for sustainable water supply,” to address their poor or declining water quality, according to DaBramo’s project proposal. She also writes, “I propose to examine the responses to declining or poor water quality and the strategies for a sustainable water supply in four distinct countries and cultures. I want to understand: The root causes for poor water quality and quantity; How the water issues are affecting the country and its citizens; and what steps are being taken (and by whom) in response to these challenges.”

For DaBramo, the process of becoming a Watson fellow began her first year on the Hill when she met with Student Fellowships Coordinator Virginia Dosch for an introductory meeting, but she did not start outlining her project until this past summer when she worked at the Greenbrier River Watershed Association. On the application process, DaBramo said, “I would say earning the [fellowship] was more energy intensive than a class at Hamilton. It required a personal statement and proposal (with developed contacts in your country) and two rounds of applications.” She cites Dosch, her parents, close friends and those who wrote her recommendations as enormous help in the process.

The project will not be an entirely new experience for DaBramo, who completed an independent field projected entitled “Situating Gender in Water-Related Issues: Regional Perspective from Jaipur and Varanasi,” where she conducted independent water research in Northern India and interviewed local leaders, professors and NGOs.

Marte’s project plans to examine volunteerism in the educational context and plans to examine the difference between volunteering done by people from outside organizations versus that of local grassroots movements. She plans to “focus on the relationship between those who volunteer and those who are the objects of their efforts,” as she writes in her proposal. “Given the growth of foreign volunteerism and the development of community based education programs, I want to develop a comprehensive and culturally sensitive understanding of their nature and impact,” she later explains.

Marte will travel to Thailand, India, Tanzania, Brazil and Spain to work alongside local organizations, then reach out to foreign ones and “experience everything that one involved in educational volunteerism can.”

The comparative literature major echoed DaBramo’s feelings about the process of earning the fellowship saying, “[It] has been the most rewarding part so far. I learned so many things about myself that I never would have if I didn’t sit down and think about them. I knew that what set my soul on fire was traveling and learning because every time I sat down to write my proposal my heart literally sped up and I would just work on it for hours.”

Volunteering is very familiar to Marte, who received a Gates Millennium Scholarship, awarded for academic excellence, community service and leadership. She also has experience in education, as she organized summer debate camps for elementary, middle and high school students and taught students rhetorical skills to help them advance to  the New York State Debate Finals as a programing director intern and volunteer with the New York City Urban Debate League in Manhattan.

Both seniors expressed excitement about where their projects might lead. DaBramo said, “I didn’t decide to pursue the Watson Fellowship as a career step, but rather as a transformative experience. I want to keep an open mind about what I will learn because I think the fellowship can lead me in a lot of different directions.”

Marte added, “As of right now my dream would be to gain as much knowledge as I can about the education world so I could hopefully create a non profit that advocates for the educational rights for students in underserved communities. This is a really rough draft and who knows, a year abroad will completely change this plan!” 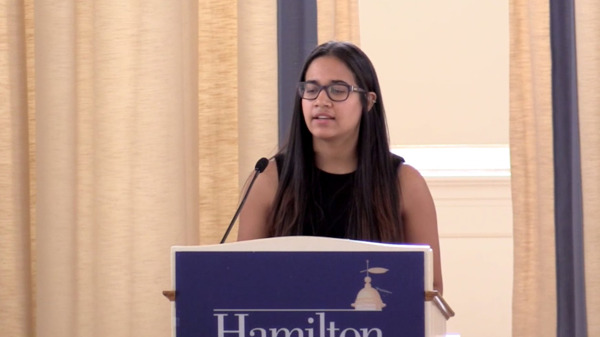