Wednesday, October 17, 2012 — Among the tens of millions of viewers watching the presidential debates this month, there is at least one group of students sympathetic to both candidates, at least when it comes to the art of debate.

Students in the debate class at Achievement First Brooklyn High School have been preparing their arguments, delving into data, and getting coached not only on what they want to say but how they say it, much like President Barack Obama and former Gov. Mitt Romney.

The students have been watching the presidential debates for tips on what to do - and what not to do.

On a recent afternoon, their teacher, Michael DiColandrea, 27, prepped the students for their first mock presidential debate. He handed out an evaluation rubric with guidelines that included fluency with the facts, eye contact and active participation.

After considering the first question, about whether or not taxes on the wealthy should go up, the students split into two sides: three students who supported Romney’s tax vision versus seven who favored Obama’s.

Fourteen-year-old Breanna Cummings was the first to weigh in. Dressed in her school uniform, she stood up and declared that the rich should be taxed at a higher rate so the money could be redistributed to the middle class and poor, which would be better for the country. That was followed by a rebuttal from the opposition and off they went, rising to make forceful, concise – timed – arguments in a respectful tone and then sitting back down to allow for the next speaker. Co-teacher Marcus Martinez, 23, was the moderator.

Meanwhile, DiColandrea closely monitored the fast paced back-and-forth, occasionally pausing the proceedings to critique and praise content, form and participation. For nearly 45 minutes, the class was deeply engaged in an ancient ritual that would have made Socrates proud.

Afterwards, Breanna Cummings said that before taking the class she didn't know anything about the elections and didn't care much, either.

"I just wanted the black president to win," she said. But when she recently started learning about the issues, she explained, she realized "there should be a reason why I want Obama to win."

Her classmate, Eyana Walker, 16, a member of the school’s debate team who had wielded a rapid-fire manner of delivery she’d learned at a debate boot camp this past summer, said she too had been rooting for Obama by default.

"But now, I kind of want Romney to win," she said, explaining that by studying health care, for instance, she found Romney's idea of handing it to the states rather than the federal government more sensible. When it comes to taxes, though, she is still on the fence.

"Both sides have pros and cons," she said.

DiColandrea, who also teaches Latin and literature, said that after coaching for four years at another school – before joining the faculty at Achievement First last year – he became convinced that debate is "part of the answer to the achievement gap," something this college-oriented charter school sees as its mission to do away with.

"It's really an equalizer," he added.

Erik Fogel, 35, a teacher at the Bronx School for Law, Government and Justice who runs the New York City Urban Debate League, said in a recent phone interview that debate can also help fix a problem in education that disproportionately affects poor and minority students – a civic achievement gap, which impedes full participation in a democracy.

And, he explained, unlike a few decades ago when debate was the preserve of elite schools with big budgets, it is much more accessible to everyone now.

"Any student can be a great debater," he said. 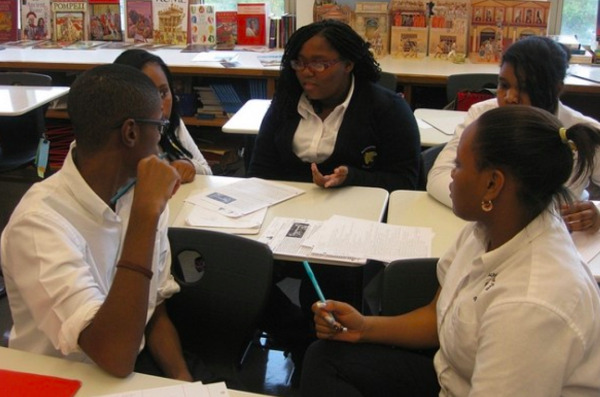