Sunday, September 1, 2013 — Imagine a high school debate tournament: Brainy kids in too-big suits arguing the finer points of domestic and foreign policy, right? Well, occasionally. But for students at urban public schools like Baltimore City College and the Bronx School for Law, Government, and Justice, debate has become more than a chance to play-act lawmakers. “This is not a game for my kids,” says Patrick Daniels (Baltimore ’99), now in his 10th year directing City College’s speech and debate teams, currently along with Baltimore ’10 alumna Amber Phelps. “This is a chance to think about the world in which we’re going to live, and think about how we orient ourselves in this world.” Daniels’ debate teams engage in “kritik”—philosophical arguments challenging the very assumptions that underlie the policy up for debate. So while the topic might be United States trade policy in Venezuela, his debaters might use their time to reject the very structure of the debate setting as racist or patriarchal, or they may argue that the fundamental notion of U.S intervention is unethical. It’s heady stuff, but it has taken City College debaters to the top ranks of high-school debaters nationwide: In 2013 alone, Daniels’ students won two of five major national tournaments, as well as the Maryland state tournament. They also met with President Obama, Supreme Court Justice Elena Kagan, and U.S. Secretary of Education Arne Duncan. In New York City, Erik Fogel (N.Y. ’02) has been the force behind the city’s debate renaissance, after years of decline as public schools lost funds and coaches. He is in his 11th year as debate coach at the Bronx School for Law, Government, and Justice— where debate trophies line the display case at the building’s entrance—and serves as executive director of the New York City Urban Debate League. In 2009, with the help of community partnerships, Fogel founded what would become the New York City Great Debaters, which provides free debate education programs for students and coaches. In 2012—the same year his debaters won the New York state championships—Fogel and the New York City Urban Debate League were honored at the White House with the 2012 National Arts and Humanities Youth Program Award. “It’s about finding the passion of every student—once you do that, their drive is unlimited,” Fogel says. “Since Socrates, forensics have been the most powerful program for students, because they find what they’re interested in, and it opens up an unlimited world.” very painful background, but because of debate, he knows how to operate in society. For me, I come from a relatively privileged background, but debate has allowed me to identify myself as a black woman in society. How could someone take away the significance of an activity like that?

Junior, Bronx School for Law, Government, and Justice. What’s more nerve-wracking, a debate championship, or speaking at the White House? Oh gosh. I think I’d have to say speaking at the White House for the simple fact that I was speaking before Michelle Obama. That was breathtaking! I’ve been in so many debates that nationals was almost a reflex—I’ve gotten so used to speaking in front of so many people. But Michelle Obama— even though she’s just one person—that was so nerve-wracking. But I was looking at Mr. Fogel, and you could just see the happiness in his face, and I realized I just had to shut out everything and get my point across. And when it was over, I got a standing ovation and the famous Michelle Obama hug. But really, White House aside, shouldn’t we focus on getting along with each other, instead of arguing? For me, it’s not so much about fighting but getting your point across, and persuading the judge and the people in the audience to see that you’re more right. There are even times you might agree with your opponent, but it’s more about persuading than it is about fighting.

Senior, Bronx School for Law, Government, and Justice. What separates a debater from his or her peers? Critical thinking—that’s what debate is all about. My partner and I are based around critical race theory—we’re interested in the ways that identity and culture play a role in any given situation. In terms of our preparation, we prepare so thoroughly for an argument, and we prepare to respond to the best argument against us. We may never even hear that argument, but the ability to understand the best argument against us means that we’ll also understand how to answer the weaker arguments. You meet students from all over the country at your tournaments. What has that taught you? I like to think that debate is an allegory for the way society functions: Some kids come from privileged backgrounds, some come in loving to defend the federal government, some are kids of color saying there are certain aspects of all of this that we need to discuss but we’re not discussing. Walk around a tournament, and you’ll see little Malcolm X’s, and Martin Luther Kings, and little Ted Cruzes and Marco Rubios. I love it—it’s a microcosm, and it prepares you for the way people communicate and interact in the world. 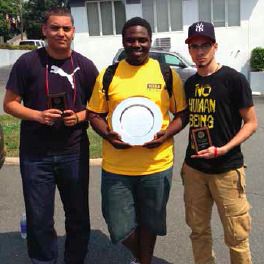