One of the biggest milestones in someone’s life is high school graduation. In a single moment, everyone surrounding you is focused only on you as your name fills the room, and you walk across the stage to collect that coveted diploma, ready to embark on a new chapter.

Valedictorians and salutatorians from local high schools such as Riverdale/Kingsbridge Academy M.S./H.S. 141, IN-Tech Academy M.S./H.S. 368, and the Bronx High School of Science were diverse students whose range of academic and extracurricular pursuits gave them unique perspectives on their coming of age.

These students now can say they’ve completed high school, but these classroom leaders have different takes on what exactly that means.

For Enzo Ramirez, IN-Tech’s valedictorian, the best part about graduation was sharing the memory with his best friend, Tyrek.

“He was such an influential person, he is always happy and just so positive,” Ramirez said. “So to graduate with him was just so nice.”

Alana Brown, RKA’s salutatorian, said getting her diploma was like taking a victory lap.

“Graduation to me means reaching the finish line of a very long and hard race,” she said. “It means closing one door and opening another to start a new path. It’s bittersweet and exciting.”

Graduation for IN-Tech salutatorian Samantha Reyes meant sharing that moment with her biggest inspiration, her father.

“He worked so hard all of his life so that I could get to this point,” she said. “He always pushed me to do my best.”

Inspired by father’s work ethic, Reyes landed an internship at Manhattan College, which then led to a full-tuition scholarship. The only person happier than Reyes was her father because he always wanted her to go there.

Graduation represented a turning point in the life of Harrison Giovannelli, the Bronx Science salutatorian.

“It was a time when the last four years came to an end in one single place, with the entire community celebrating this large moment of transition between our past and our future,” he said.

All those years of work culminate in one final duty for valedictorians and salutatorians: The speech. It’s an opportunity to give counsel, impart wisdom, crack a joke, and address their class in its entirety one the last time.

Jason Chan’s biggest regret at RKA was not participating in clubs or sports, something he shared in his valedictorian address, emphasizing the value of building relationships with people in one’s community.

George Stefanakis wanted to relay a simple yet powerful and important message to his classmates at Bronx Science: “Do not let another person write your story.” In his valedictorian speech, Stefanakis urged his fellow graduates to be the driving force behind their own lives and not let that course be dictated by others.

Being an avid reader, Ramirez related his time at IN-tech to a chapter of a book.

“This chapter is ending, but the time to start a new chapter is happening now,” he said. “There is not really one specific book I can relate to. This is really about writing your own story.”

Since Reyes spent most of her time at IN-Tech forging relationships with teachers and students, it only made sense she made that the focal point in her graduation speech.

“We form many relationships through education, and it has only made us stronger people,” she said. “The things that we have learned through these relationships are going to impact us for the rest of our lives.”

Giovannelli used his speech as an opportunity to reminisce about the things he and his class learned during their high school years. His three key aspects were learning how to work hard, overcoming a challenge, and discovering the benefits of community. Giovannelli also reflected on other aspects of his school, like how it differed from portrayals of schools in the media as well as the expectations of others.

“Bronx Science is not ‘High School Musical,’” he joked. At the same time, the Bronx Science community was far from the competitive and cutthroat group outsiders believe when they picture the specialized high school.

For all their success academically, these students also were quite active in other extracurricular areas.

RKA’s Brown tried her hand at athletics, joining cross-country her freshman year and track her sophomore year. After a back injury and later shin splints, she managed not only the cross-country and track teams, but the wrestling team as well.

RKA wrestling and track coach Michael Lepetit praised not only Brown’s intellect and organizational skills, but also her bright personality.

“She was just as good for an organized spreadsheet as she was for a good laugh,” he said.

Outside of his purely academic pursuits, Bronx Science’s Stefanakis was a member of the Greek Club and editor-in-chief of the Math Bulletin where he marshaled and compiled a collection of stories, term papers, art and jokes all centered around, well, math.

Giovannelli was part of Bronx Science’s speech and debate team, one of the best and most dominant in the country. He and his partner qualified for the Tournament of Champions, and thanks to Giovannelli’s leadership, the team achieved major success at the Harvard Forensic Tournament and the Barkley Forum at Emory University.

“Me and my dad made a robot so it would go underwater,” the IN-Tech graduate said. “It had a camera and lights so it could see underwater. It was kind of hard to make. There were some days where it did not want to continue because I hit a roadblock. But you wanna keep going because you want to see the finished product.”

Ramirez was featured in the school play, “The Brothers Grimm Spectaculathon,” as a narrator.

“I love to act crazy and make other people laugh,” he said. “I did a play in middle school and I loved it. So to do it again with friends and family support was great.”

Reyes wasn’t in a school play like her IN-Tech classmate, but she was a member of several clubs on campus, most notably the school leadership team.

“Samantha brought the students concerns to the school and she articulated them very clearly,” Seltzer said. “She gave reasons for anything that the students wanted, and she accepted the answers and went back to the students to explain it to them.”

All these graduates have big things in store.

Chan and Reyes will both attend Manhattan College. Chan will study computer engineering while Reyes will take on business administration with a concentration in finance.

Brown will attend Smith College in Northampton, Massachusetts as a biology major on the pre-med track.

Giovannelli will spend his summer working at a debate camp and then with the New York City Urban Debate League, all before heading to the University of Chicago to study computer science and economics.

Chan imparted some last minute wisdom in the closing moments of his speech that could serve all of these scholars well in the coming months and years.

“Go out there and grab a hold of the future,” he said. “But be careful not to crush it.” 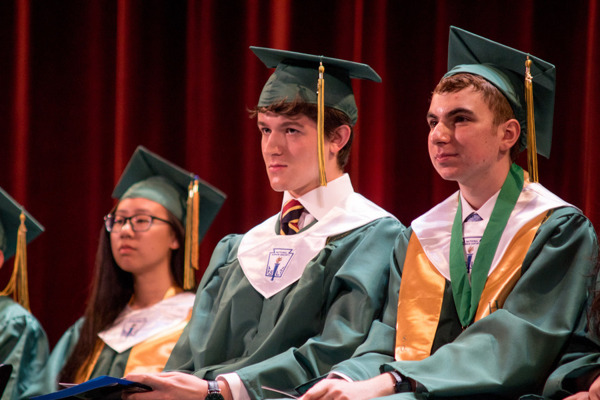